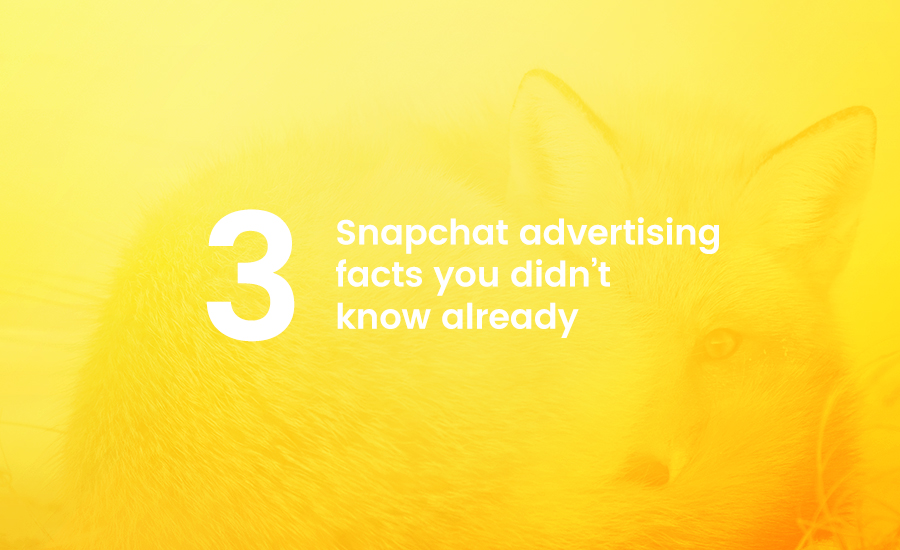 Snapchat is a bit of an enigma for marketers.

On one hand, Snapchat has a huge user base that’s extremely active.

On the other hand, accessing that user base with ads has proven challenging.

The challenge comes from the unique way Snapchat users interact with the platform.

Unlike Facebook or Instagram, Snapchat content is ethereal. User content doesn’t stay on timelines or newsfeeds. So there’s no central location for user attention, and no real touchpoint to place ads on for consistent impressions.

To say the least, effectively marketing on Snapchat is tricky.

Here are some little-known facts that will help you solve the Snapchat advertising riddle.

1. Snapchat is a secondary advertising channel

I know you’re wondering just what this means.

It starts with Snapchat user demographics.

The majority of Snapchat’s user base is made up of young people.

Snapchat has been popular with millennials for quite some time. However, Snapchat is one of the most popular social networks among teenagers.

This sounds counterintuitive. But consider how teenagers usually buy stuff…

They ask their parents.

So, measuring your return on ad spend from Snapchat advertising can create some deceiving numbers.

Since parents do the purchasing, the actual conversions may happen on other social media platforms or will come from Google or perhaps in-store.

In fact, it may even seem that your Snapchat ads aren’t getting any engagement at all, because the engagement is a conversation between the teenagers and their parents.

Getting results on Snapchat can be more about finding better ways to track Snapchat engagement or connecting conversions from other channels to Snapchat impressions.

Creating an ad that prompts users to screenshot the ad and show it to someone else or use it as a coupon when they check out could help you follow the trail that people take to get to the sale so you can find out how well your Snapchat campaigns are performing.

In the end, a huge part of the Snapchat advertising equation is finding a way to track where the user’s attention is in an app designed to hide user attention.

2. Snapchat ad creative is really tough to get right

Snapchat is designed for one-to-one communication. Even when someone sends a snap to multiple friends, it creates a separate conversation for each person.

Even Snap stories are presented individually.

This means that it’s incredibly challenging to create ads that fit into this environment. An ad is basically like some guy coming into a conversation and yelling something entirely unrelated.

It goes without saying that creating ads that add value to an environment of one-to-one conversations is rather tricky.

A great way to tackle this challenge is to focus on creating ads that feel and act like normal snaps. That way your ads feel like a slight diversion into a different conversation without being jarring.

This is effective because the conversation topics on Snapchat change regularly. Users are accustomed to that.

They’re not accustomed to people yelling, “BUY NOW!” while they’re trying to talk with their pals.

So creating Snapchat ads is a more involved process than creating ads for other channels. But it’s worth it when you get your Snapchat advertising right.

3. Snapchat is best for companies with large advertising budgets

Since Snapchat doesn’t drive the sort of direct conversions that other platforms can offer, Snapchat ads tend to function more like top-of-funnel content.

However, Snapchat needs to keep their boat afloat.

So you pay for Snapchat ads the same way you’d pay for other social media ads (or at least similarly).

This can result in a lot of ad spend that essentially generates leads rather than sales.

Now, this doesn’t mean that Snapchat advertising is unprofitable. It is.

But you’ll need to invest a bit more in Snapchat advertising to really get the return train going. You’ll also need capable analytics tools to track your return and make measurable improvements to your ads.

In short, you’ll really want to have your marketing ducks in a row before you get too deep into Snapchat advertising.

Snapchat advertising can be extremely profitable. But only if you take the right approach.

Views: 2812
Thank you for subscribing!
This site uses cookies and other tracking technologies to assist with navigation and your ability to provide feedback, analyze your use of our products and services, assist with our promotional and marketing efforts, and provide content from third parties. Cookies Policy
I'm in