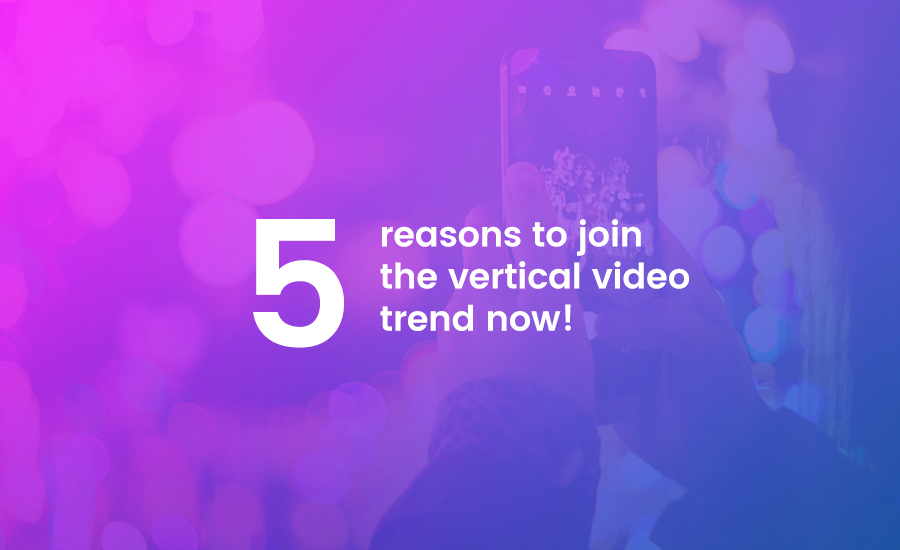 Historically, video has been shot horizontally.

This is no problem on platforms where the majority of users view the content on their desktops. On a desktop, horizontal video looks best.

Quick math tells us that using vertical video in your social media marketing strategy is the best way to go.

I’m going to flip the script here and give you some fast how-to tips upfront, so you can take advantage of the vertical video trend immediately.

A DSLR or professional camera is great for creating product videos and structured marketing media.

Creating videos on your phone organically creates a video that fits into the social media space and presents your brand as a member of the community.

A good video editing app like Spark Camera is just about all you need to create high-quality videos from your phone that will fit right in on IGTV, Facebook or Snapchat.

9:16 is what you see when a video takes up your entire phone screen.

4:5 is the aspect ratio used for videos that are more square and typically play on your Facebook or Instagram feed while you’re scrolling.

An additional benefit of using your phone is that it automatically shoots in the correct aspect ratio for most social media platforms, so you won’t need to adjust it during editing.

2. Talk to the camera

The biggest reasons people go to social media are entertainment and amusement. So talk to the camera (which is actually talking to the audience) to inject some of your personality into your social media videos and put the focus on reaching out to your viewers.

Also, keep the content of your videos light. The occasional serious post is fine. But you don’t want your brand to feel like a downer all the time.

Also, since you’re using your phone, be sure to hold it close enough to get good sound quality.

But there’s a very slim chance that anybody will watch a 60-minute video on Instagram.

Stick with videos of one to three minutes and always open with a strong hook that communicates the benefit of watching the video to the end to increase viewing time and engagement.

I know this sounds like a captain obvious statement.

But you can shoot videos horizontally and then crop them in post production to create a vertical video.

This may be tempting. Especially if you already have a bunch of horizontal video. Why not just repurpose it, right?

The reason is that cropped horizontal videos don’t look that great. Typically the frame is just a bit off or part of your subject gets cropped out. It’s just really hard to create a video that looks polished and purposeful this way.

It might be a bit more work. But you’ll get a lot better social media video engagement if you take the time to shoot new videos vertically.

That’s how you create good vertical videos in a nutshell.

But if you’re still not convinced that you should follow the vertical video trend, here are some tidbits that might help you get on board.

Why you should be following the vertical video trend

1. Three out of five online videos are watched on mobile.

Yes. Over half of the videos on the internet are watched on mobile devices.

And mobile devices are designed for vertical videos.

2. People hold their phones vertically 94% of the time.

Even though our field of vision is horizontal, people still hold their phones vertically almost all the time.

So, vertical videos work for how people most often use their phones.

Optimizing for mobile is more important than ever. Mobile apps account for 70 percent of the time spent on social media.

Part of optimizing for mobile is embracing vertical video.

Facebook, Instagram, Snapchat, LinkedIn and other social networks now support video natively within their mobile app. Even YouTube now supports vertical video on mobile by displaying the creative without side black bars.

And social media platforms are actively expanding their video capabilities.

Vertical video looks best on most platforms. So it’s no surprise that vertical video is performing well on social media.

Snapchat ads with vertical videos get nine times more views than those with horizontal videos.

The vertical video trend is real.

This is a big picture thing, but the number of smartphone users worldwide is expected to reach 2.87 billion by 2020.

Not only that, but rapidly expanding markets like Africa and Asia have large swaths of mobile-only internet access.

If you want to know how marketing will look in five years, 10 years or even 20 years, the future looks increasingly mobile, especially in the rapidly globalizing economy.

Working with vertical video is a quick, easy way to help prepare for that advancement.

It looks like vertical video will be around for a while. Our bet is that it’s a safe trend to follow. So use this article to jumpstart your vertical video production. Then come back and let us know how it’s working for you!

Views: 8787
Thank you for subscribing!
This site uses cookies and other tracking technologies to assist with navigation and your ability to provide feedback, analyze your use of our products and services, assist with our promotional and marketing efforts, and provide content from third parties. Cookies Policy
I'm in